11 Mistakes to Avoid while drafting Minutes of the meetings. 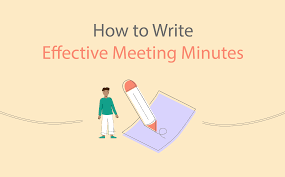 It was the year 2015 when for the very first time I drafted the minutes in the initial era of the Companies Act, 2013 and Secretarial Standards by ICSI, I was an Intern and drafted minutes under the guidance of my Mentor.

Since then and till now I have learned a lot about the drafting of Minutes where in the past era I did a lot of mistakes in drafting various minutes and I am still learning through drafting and recording of minutes is a very crucial part of compliances made by a Company Secretary but still, a major part of Corporate sector thinks that It’s just a copy-paste task done by a Company Secretary.

Failed to conduct observance of Secretarial standards while Drafting Minutes:

Secretarial Standard on Meetings of the Board of Directors (SS-1)

These Standards guide the format and important points to mention in the drafting of Minutes which includes meeting no. The Day, Date, Time, and Venue of the meeting must be initially mentioned in the minutes.

SS-1 is also applicable on drafting of Minutes of Committee meetings as per Section 177 and 178 of the Companies Act, 2013.

Quorum Data in the minutes at the beginning of drafting minutes of the meeting:

Minutes are the evidentiary proof of whatever happened in the meeting of members or board of directors specifically also it is pertinent to mention who all were present in the meeting and the minimum requirement of Quorum was fulfilled or not.

If any director in whose interest the resolution is being passed should not participate in the quorum of the meeting and if Company requires having the majority of Independent directors then one must be present in the meeting of members and board.

Taking attendance is a basic but critical function of the board meeting minutes, either its Board members or invitees it is pertinent to take attendance and keep the record of the same while drafting Minutes of the meetings, though attendance of members in a meeting is much more critical as proxies are also available there.

If any meeting is conducted through Video conferencing mode the attendance by roll call must be taken and as a good practice, their presence must be recorded through signing attendance later on.

Make sure your hands are good in English grammar:

The secretarial department fails to pay attention to these minor yet important requirements.

When minutes are maintained in loose-leaf form, sometimes blank pages are left in between. The blank pages should be crossed to avoid any presumption for interpolation. Similarly, sometimes each page is not initialed or signed but the last page is signed but sometimes not and dated.

Time of Commencement and Conclusion of meeting:

The meeting should be commenced with the chairman’s speech and conclude with a vote of thanks and drafting of minutes should be as per that, so while recording minutes both timings must be recorded for entry in minutes of the meetings.

Drafting of minutes should be completed within 15 days from the date of conclusion of the meeting:

At the end of the minutes date of entry and date of signing should be separately mentioned:

Date of entry in the minutes’ book of date of signing of minutes by the chairman may or may not be the same; keeping in mind the following factor one should significantly add the date of entry and date of signing. Likewise, your date of the meeting is 30th September 2020 and you finalize your draft minutes on 7th October 2020 but the chairman signed the minutes in the next board meeting held on 27th October 2020.

In the same case, Chairman may sign the final minutes on 7th October 2020.

Consideration of Minutes of the previous meeting of board and committee meetings as applicable:

Minutes should mention the brief background of the proposal, summarise the deliberations and the rationale for taking the decisions:

The entire agenda item to be discussed in the meeting should be sequentially added and their proposal or summaries should be mentioned in concise form while drafting the minutes.

As the Secretarial Standards suggest minutes should be preserved permanently unlike other statutory documents for which 8 years is suggested in the Companies Act, 2013.

Include only large-scale decisions taken over the agenda of the meeting or any agenda discussed with the permission of the chairman and do not include any extra-ordinary or irrelevant matter discussed for personal opinion.

Any suggestions or modifications are most welcome in the comments.