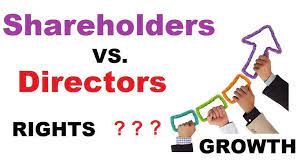 Directors are bound to perform in the best interest of the company. They are less powerful in comparison to the shareholders are members of the company and have the power to remove a director by the special resolution. In a company maximum number of directors can be up to 15 only either in the case of a public company or a private limited company.

Comparison Table Between Shareholders and Directors

A Shareholder may or may not be a natural person, which means a company or HUF or any firm can also acquire a shareholding in a company. One share can be purchased by  2 people jointly. The ownership of a share can be transferred between two people. Shareholders have the voting rights as assigned under the Articles of the company as per the Indian Companies Act, 2013. There are shareholders in two categories equity and preference.

Who are the Directors?

Compliance reporting, Financial responsibility are a few duties performed by the directors of the company. In India Companies Act, 2013 there are various types of directors in a company namely executive, independent, additional, alternate, Non-executive, Managing, and small shareholder director.

Directors in India are considered officers in default due to their decision-making authority. A single company can appoint only 15 directors maximum. but the minimum number of directors in a company is different in various kinds of companies like 1 director in OPC, 2 directors in case of a private limited company, and 3 directors in a public company.

More Differences Between Shareholders and Directors

Both Shareholders and Directors are Corporate terminologies that carry huge responsibilities for a company. Though Shareholders do not carry any monetary liability apart from their paid-up amount on subscribed capital but directors are bound for their liability as well for any non-compliance in the company.

Directors hold very dignified positions in the company to make it successful. Any single individual who can play both roles in a company is a Shareholders and Directors as well. It is very common in the case of private limited companies that shareholders and directors are the same people.

10 Useful Differences in Shares and Debentures

4 Major Non-Compliance by “NYKAA”- Compounded before its IPO.